“For his first twenty-five years, my son Rich was healthy. He was six feet, two inches tall and two hundred pounds. He kept fit by playing basketball and riding his bike just about everywhere. Since he was a Democrat and I was a Republican, we had a lot of debates. Usually, he won.

In the fall of 2005, Rich started working on a masters degree in political science at San Diego State University. During his first few months at SDSU, he called me every day from his cell phone, crying. “Mom, just stay on with me,” he’d say. And of course, I did. I knew something was off, but I didn’t know what to do about it. He’d never had panic attacks before.

Soon enough, Rich fell in love with the school and with San Diego. He worked as a teaching assistant and spent seven days a week in Room 131 of Nasatir Hall, the political science building. He wrote his master’s thesis on the politics of stadium building. In his graduation picture, in the Spring of 2006, he squinted. One of his eyes would not open all the way.

Rich stayed in San Diego and applied for law school. He told me that even if he got in, he wasn’t sure if he should attend, because he’d developed short-term memory problems.

In the Fall of 2007, Craig, my husband, and I went to visit our son. We’d pick him up in the morning and run errands. Then Rich would go back to his apartment for a nap until dinner time.

We didn’t get it.

Rich’s girlfriend told us, “He gets headaches a lot. He curls up like a cat and sleeps by the patio window–every day.”

Before leaving, I noticed a vein on the right side of Rich’s hairline that traveled to his right eye, just above his eyebrow. A few months later, he developed problems with his balance, and he had nosebleeds every morning. We thought it was a deviated septum, which I’d had. He scheduled a doctor’s appointment for March 14, 2008.

Thursday evening, March 13, I was home checking email. Craig was taking a shower. The phone rang, and Rich whispered, “Mom?” He had the worst headache of his life, and he’d been projectile vomiting all over his apartment.
“Get an ambulance immediately,” I told him. “Get to the hospital.”

The emergency room doctor called us at one in the morning. Rich had bleeding on the brain. He’d had a seizure and would need more testing….

I could not pronounce glioblastoma multiforme, but I could ask, “What causes it?”

Why had I never heard this before?.….

This is Ginger Farver’s story. It’s an excerpt from Katie Singer’s book ‘An Electronic Silent Spring’ published earlier this year: 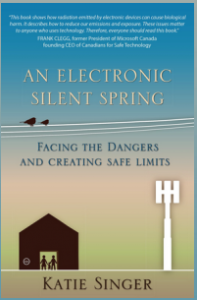 [1]“This book shows how radiation emitted by electronic devices can cause biological harm. It describes how to reduce our emissions and exposure. These issues matter to anyone who uses technology. Therefore, everyone should read this book.”

“Katie Singer has performed a great public service by assembling compelling scientific studies and personal experiences about the effects of exposure to radiation from man-made electricity and wireless devices on birds, wildlife and human health.”

Why An Electronic Silent Spring?

Marine Biologist Rachel Carson published a book called ‘Silent Spring’ in 1962. At the time nobody really understood the consequences of spraying with pesticides. Rachel Carson’s book became one of the landmark books of the 20th century, inspiring an environmental movement that lead to the creation of the Environmental Protection Agency (EPA).

Perhaps we are at the beginning of a similar movement with EMFs? It would be nice to think so. In any case, that’s what Katie Singer’s book [2] sets out to do, “to attract the attention that this issue deserves”.

Don’t be mislead by the excerpt. This book looks at the science on a huge range of EMF issues, including:

Why The Review Now?

I bought this book soon after it came out at the beginning of the year. I read it and I liked it a lot. I made a note to write a review on it.

Then I got side tracked with other stuff. A few weeks ago, in the forum [3], James wrote this message:

Hi Lloyd and everyone,

I highly suggest everyone order a copy of this book. It seems very provocative, and full of a wide array of information, from scientists, policy makers, intellectuals, and everyday people….”

Katie Singer is a writer and it shows. It also shows that Katie knows what she’s talking about and that she’s done her homework – she works on public policy with the Electromagnetic Radiation Policy Institute.

To write this book Katie contacted scientists, physicians, community activists and lawyers from all over the globe. Katie has skillfully brought together scientific testimonies and research papers and then she’s dissected these testimonies to allow new insights to be made.

Katie reviews a lot of studies in her book but the scientific testimonies are real gems. The book includes testimonies from the following people:

When you’re struggling with ill health from EMF exposures it’s easy to become too focused on the problems. There are solutions. But if you’re looking for a way to deal with the symptoms of electrical sensitivity this book is not the best choice.

What’s refreshing about this book is that it looks at solutions in the broadest sense. There’s what you can do as an individual, personal EMF protection solutions. But this book also set’s out to put forward a framework for all the different parties dealing with these issues. The fact is EMFs is an issue that we need to deal with as a society as a whole. Katie looks in detail at the “next steps” for legislators, regulators, utility and telecom companies, manufacturers, healthcare providers, schools and libraries and Citizens groups.

Why Should You Buy This Book?

This book doesn’t just trot out the same facts for the umpteenth time. It’s fresh. What I also like is that it doesn’t unnecessarily complicate matters. As Katie says in her introduction, “sometimes, information is simplified in a way that renders it slightly inaccurate”. I didn’t find it inaccurate.

This book exists in Kindle, Hardcover and Paperback versions and you can buy it from Amazon [1].

EMFs represent a monumental threat to life. This book reports on the effects of electricity and wireless devices and presents solutions.