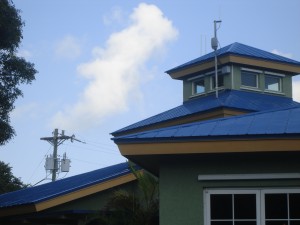 [1]The further you are away from the power line the less you are exposed to the electromagnetic field. How much depends on the power in the line, the magnetic field, and the voltage of the line, that’s to say the electric field.
The biggest power lines are in the 400 kV range coming from a generating power station. The line voltage gets smaller as the power is reduced. The further you are a way from the power station the less risk you have of being exposed to very high voltage electric fields. You can get an idea of the sort of power line by looking at the size of the pylons, the way the cables are strung on the insulators and the length of the insulators. The electromagnetic fields come from the actual cables not from the pylons.

Electrical Appliances In The Home

Microwave ovens and hairdryers create significant magnetic fields when in use. Although the magnetic field given off by these devices is much lower than that of power lines, the difference is that we get so much closer to these appliances. For instance at a distance of 2 cm from a microwave oven the magnetic field could be as high as 200 micro-tesla and yet be as little as 10 micro-teslas just a foot away. TV and computer monitors are another source of electromagnetic radiation. Old Cathode Ray type screens used to give off very high electric and magnetic fields, modern screens do give off much lower levels of EMF. The danger lies in the fact that some people spend excessively long periods in front of a computer screen. So even if the EMF levels are low over the course of 6,8 or 10 hours daily the accumulated EMF levels can be very high.
WiFi uses microwaves to carry signals. While the signal is not especially strong the danger comes from the fact that when you have WiFi in your home it is emitting electromagnetic radiation 24/7, even when you sleep. The human body is tremendously resilient but when subjected to such prolonged exposure inevitably there are long-term health consequences.

Similar to WiFi, cell phone towers emit radiation. The World Health Organisation (WHO) in their 2006 report put the number of cell phone transmitters at over 1.4 million worldwide, today the number is certainly significantly more. In the UK there are thought to be more than 50,000 mobile phone base stations. Because of opposition from local communities to mobile phone masts, the cell phone operators are beginning to hide them inside structures. This can be in churches and steeples or more alarmingly, they are being fixed to private houses, drainpipes and roofs. International exposure guidelines have been developed to provide protection against the established effects from RF fields but these are largely based on the International Commission on Non-Ionizing Radiation Protection (ICNIRP) which dates back to 1998 when there was little research on the subject.

Cell phones emit and receive microwaves that are measured in the megahertz range of the electromagnetic spectrum. The specific absorption rate (SAR) is a measurement of how much electromagnetic radiation is absorbed by the body whilst using a mobile phone. So the higher the SAR the more the radiation is absorbed. In the UK the government has endorsed the 2W/kg in 10g and tissue limits as recommended by the ICNIRP . In the US, the cellular telecommunications and Internet Association requires all cellphones to comply with the Federal Communications commission SAR limit of 1.6W/kg in 1g of tissue. The reliability of these safety guidelines is somewhat dubious given that they were established largely on the research which was conducted at the date of the 1998 ICNIRP report. This essentially runs along the lines of saying that since there is no heating effect there is no harm. We now know this to be simply not true.

The biological effects of non thermal relatively weak electromagnetic fields are well documented. The BioInitiative report [2] has the facts on thousands of studies showing there are low level effects, you can also read what Professor Johansson has to say about this here [3].