What if I told you, you could enjoy the exact same WiFi performance as you do now but with a fraction of the radiation exposures?

That you could stream, watch movies, listen to music, connect multiple devices all with a greatly reduced exposure to WiFi radiation?

But how low radiation? How does it work? Is it really safer?

A Step In The Right Direction 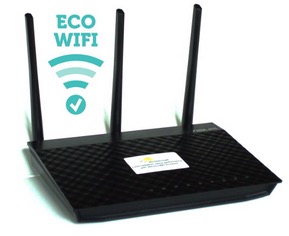 Let me just say this upfront: the safest way to connect to the Internet is via a hardwired Ethernet connection. That’s to say no WiFi.

Why? Because WiFi devices introduce radio frequency microwave radiation into your environment.

The solution I’m reviewing here allows you to reduce your radiation exposures by a factor of 20.

But it’s still only a step in the right direction because you’re still exposing yourself to WiFi.

Should You Be Concerned About WiFi?

The fact is there are now thousands of peer reviewed studies conducted by independent scientists from around the world that show WiFi radiation is potentially extremely harmful.

To better understand the dangers of WiFi radiation, read this article.

JRS Eco-WiFi enables you to significantly lower your WiFi radiation exposures. You can:

I’m not going to take the credit here. I didn’t invent it. But I know the man who did.

Though invent might not be the right word because maybe low radiation WiFi existed already?

If it did not many people knew about it because I’ve had a LOT of people asking me for a low radiation WiFi solution and I haven’t really had anything solid to recommend them.

Now I have. The world’s first low radiation WiFi router – to my knowledge.

This is actually a package. There are two components:

What Jan-Rutger Schrader did was to install his JRS Eco-Wifi software on an existing Asus router.

It currently exists in 3 different versions. Each version offers different functionalities and different levels of performance. I contacted Jan-Rutger a few weeks ago and he sent me his mid range model, the JRS Eco-WiFi-03, so that I could do some testing.

I decided to do a video review so you could see it (and hear it) in action:

How Is Low Radiation WiFi Achieved?

The Eco-WiFi router has a 10x reduced pulse interval. It emits a signal at 1 Hz. Only once every second.

Classic WiFi pulses at 10Hz , that’s to say 10 times a second. You can hear this in the video when I compare the JRS Eco-WiFi fitted router with a normal router.

The normal modem/router sounds like a machine gun – this is the WiFi beacon generated by the modem router.

The second way low radiation WiFi is achieved is by offering lower transmit power, or pulse strength. With a classic WiFi set-up the pulse strength or power is pre-determined. The JRS Eco-WiFi fitted router allows you to set your transmit power according to your needs.

How To Achieve Optimum Low Radiation WiFi Set Up

There are three aspects which are important to achieve an optimum low radiation set up:

Distance from the router is important no matter what WiFi device you are dealing with. “Distance is your friend”. In other words putting just a few extra feet between you and your router will reduce your exposures significantly.

Transmit power is the other important variable. This you can change by going into the menu on the Eco-WiFi software. Most classic WiFi has a transmit power of 42mW.

The third important feature is scheduled deactivation of wireless transmissions. You can go into the menu and pre-set exactly at what times you want the WiFi to switch on and off. If you are connecting to the Internet wirelessly my recommendation is that you set it so that the WiFi signal switches off at night. Every night.

WiFi Transmit Power – How Low Can You Go?

The JRS Eco-WiFi fitted router offers really good flexibility. It allows you to set the pulse strength, or transmit power to anything between 1mW and 70 mW.

Aim to set it as low as possible. The lower the transmit power the lower your radiation exposures – all other things being equal. 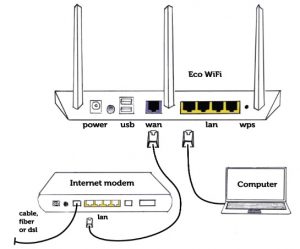 Start at 1mW. See if your connection is good. If not increase it to 10mW. And so on and so forth. Keep adjusting like this until you hit the sweet spot which gives you a reliable connection with the lowest transmit power.

Is This The Right Router For You?

If you can hard-wire do so. It’s much safer.

If you can’t go hard wired then honestly equipping your home with this product is a no-brainer. I know of nothing like this on the market – it enables you to make your wireless connection MUCH safer.

This router offers WiFi connectability with less radiation but the same performance, this is the biggest argument for buying this device.

Here are the cons:

*It’s possible to connect to the Internet with an Ethernet cable (hardwire) with this router and disable WiFi capability. This is another way of using it. So 90% of the time you might be on a hardwired connection, and then occasionally, perhaps when you want to surf the Internet whilst you’re sat out in your garden, you’ll activate the WiFi.

I have to say unashamedly, I think this router package and the technology it encompasses are a wonderful idea.

You can purchase it directly from JRS Electro Health – they ship worldwide. And it comes with a 2 year warranty.