If you thought you could solve the problem of cell phone radiation by switching back to your home phone and your landline is a cordless phone, think again. Studies show that cordless or wireless telephones emit radiation just the same as cell phones.

In some cases cordless phones are more dangerous than cell phones.

Most cordless phones use DECT 6.0 (Digital European – version 6.0) technology. The handset and the base of the phone, emit pulsed radio frequency microwave radiation. Even when you don’t receive calls.

Cordless phones emit a form of electromagnetic field called radio frequency microwave radiation. This radiation, although it is non-ionizing, and so has less energy than x-rays or gamma rays, a growing body of independent research links these exposures to a long list of disease including cancer.

Our governments, the companies selling these devices, the medical establishment and many so-called experts continue to say that this radiation is perfectly harmless but there is a lot evidence to show that this is not the case.

There are so many devices that emit this form of radiation (anything wireless or smart) in our homes, schools and workplaces, that our daily exposures are now at unprecedented levels.

We’ve always loved the idea of being able to talk to one another across distances. Tin cans attached to a long string were once used to communicate. In the 19th century we graduated to the telephone, ever since then have been refining and reinventing the “talking telegraph”.

Anyone older than forty remembers when all telephones had a cord attached to them, thus grounding them to the incoming telephone line–it was a cumbersome but effective. You might remember using extra-long phone lines to connect your phone to the jack so you could roam about your house. Even that was pretty liberating.

When the cordless home telephone came into being in the 1980s there was no going back. They quickly became the household norm.

In a matter of a very few years we went from relatively low power, low frequency analog phones to high power, higher frequency (some of the new phones operate at 5.8 Gigahertz) digital or pulsed radiation DECT models. Because telephone advances happened faster than we could understand the relationship between their radiation levels and cancer risk, cordless systems weren’t viewed as a health problem. Not until cell phone radiation studies brought the risk of brain cancer to light. 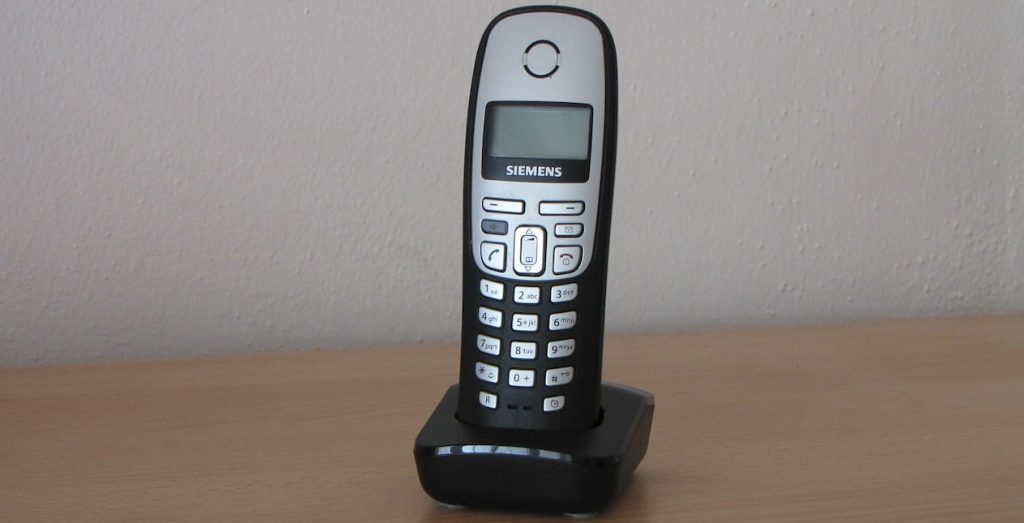 Research from Swedish scientists concludes that cordless telephones raise your risk of developing cancer. After evaluating malignant brain tumor patients’ usage of cell phones vs. their usage of cordless house phones, they found the cancer risk was multiplied for those who used DECT cordless and combining the two made the risk even higher.

The third problem is that most cordless telephones emit radiation from the handset, as well as the base, at full power, even when the phone isn’t in use.

The radiation from the DECT cordless handset and/or charger sends emissions throughout your entire house–all the time.

Watch my short video on cordless phone radiation to better understand what I’m talking about.

Yes, it is in some circumstances. With EMFs, proximity to the source (of the EMFs) and length of exposure are two very important factors.

Do you go to bed at night with your head just a few inches from a DECT cordless phone base? If you do you are exposing yourself to significant levels of radio frequency radiation, just at the time of day when your body is the most vulnerable. This is the worst type of cordless telephone radiation exposure.

Neither DECT phones nor cell phones are good for you in terms of radiation exposure, and certainly not in combination. It would be wisest to follow the advice of respected Harley Street physician Dr. David Dowson, “having a cordless phone is like having a mobile mast [cell phone tower] in your house. I’d recommend anyone who has one to switch to a plug-in phone.“

How To Reduce Your Exposure

Throw away your cordless system and go back to using a corded phone. Problem solved!

It’s that easy. But is it? I know you’re listening to what I am saying here, but are you really ready for to take this step?

Don’t feel guilty when you answer this. If I hadn’t experienced electrical sensitivity I’d probably have a cordless phone just like everyone else.

Here’s what you can do to minimize your EMF exposure and feel a little less guilty:

If you really can’t live without your cordless phone then better to get a low EMF or eco-DECT cordless model. Low EMF DECT cordless phones like the Siemens Gigaset Cordless Phone still emit radiation but they have advantages. Here’s what the Gigaset website has to say about ECO DECT mode:

I recently purchased a Siemens Gigaset cordless phone. I can confirm that they do not emit radiation when on standby.

BUT this function does need configuring. That’s to say, the model that I received, when I took it out of the box it was operating like a normal DECT cordless unit and emitting EMFs.

In order to activate ECO DECT mode, press Menu – Settings – ECO dect – and deactivate the Maximum Range option. I was able to test this with my radio frequency (RF) meter.

Update June 2019: An alternative to the Siemens Gigaset range are the Panasonic

Energy Star units – according to the manufacturer they have “Intelligent Eco mode which automatically lowers the power consumption when you’re using the handset close to the base unit.“

Even though a long telephone wire is a cumbersome mess, my advice is – play safe. Being tethered to your land line phone jack is a small price to pay for long term improved health.

If you are hesitating replacing your cordless DECT phone with a corded phone, don’t hesitate any longer. Using a low EMF corded phone

(thats to say a model which has an inbuilt speakerphone and jack, for corded headset, prefer “airtube” version) will reduce your EMF exposures significantly.

A basic model will suffice for most people, but more sophisticated corded telephones (no ear phone jack on this one) are also available with answering machine.

Another alternative is to try and find an old analog cordless phone not as safe as a corded phone but considered much safer than the DECT technology – works at a lower frequency – the EMFs are not pulsed.

Have You Got The Message?

Did you ‘get’ that if you use your DECT cordless telephone near its base your exposures are higher? They’re higher because you’re exposing yourself to a double dose of EMFs. You get zapped with the radiation from the phone AND from the base unit.

Do you and your family a favor deal with your cordless phone radiation exposures today.