It’s in our homes, offices, schools.

There’s more and more of it. Fact.

Most people can’t feel these exposures.

Whether you can feel them or not they’re there. Doing their damage.

Most people prefer to ignore them.

But if you’ve got symptoms, if you can feel what the radiation is doing to you, you can’t ignore it.

You can’t shield your whole life but you can shield a room, or several rooms.

Shielding from RF radiation is not that difficult.

But it can be expensive.

Shielding paint is currently sold at around $70 per liter. Depending on the size of your room you could need lots of liters of it.

Fortunately there’s a much cheaper way of doing it.

I use a cell phone in the video.

That’s just to demonstrate the effectiveness of the shielding material.

This material can be used to shield entire rooms.

It’s not difficult. It’s not expensive but there’s a right way of doing it.

Do it the wrong way and you could make matters worse.

Let’s assume you want to shield your bedroom.

Even if you’re really careful about how you shield your walls, inevitably there will be gaps.

Leakage is why even the smallest micro crack or gap can have a huge effect on shielding performance.

There’s another reason too.

Mylar film, like most forms of RF shielding, reflects on BOTH sides of the shielding.

The smallest amount of radiation that leaks in will be reflected and effectively amplified by the inner surface of the film.

That’s why there’s a protocol to respect when shielding.

A golden rule that must ALWAYS be respected.

The golden rule is measure/shield/measure and then shield again as necessary. And so on.

I can’t stress this enough.

This means you need a reliable RF meter to be able to measure.

Having an RF meter [1] is a prerequisite to shielding.

It forms an integral part of the golden rule.

Is Mylar Film As Effective As Specialized RF Shielding? 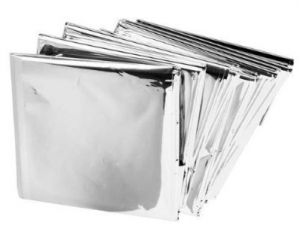 There are RF shielding products on the market which have a much higher decibel rating and so offer theoretically better protection.

I say theoretically because it depends how you use these shielding materials.

You can obtain just as good shielding performance with Mylar film as with most commercially available RF shielding products by respecting the golden rule.

Remember what I said: measure/shield/measure and then shield again until you get it right.

Careful when you attach the Mylar film to your walls not to puncture it. Adhesive tape or wallpaper paste is preferred.

If Mylar Film Is So Good Why Buy RF Shielding Paint?

Aesthetics. Mylar film is effective but it won’t look good on your walls. Shielding paints and fabrics can be covered over with another paint or wallpaper.

You might want to use Mylar as a temporary solution. If your symptoms improve then you can replace it with something less visually intrusive.

You can buy Mylar combo pack from LessEMF [2].

You will probably need to ground also.