A few days ago I received this message from one of my readers, Craig, who is worried about Bluetooth radiation:

Hi Lloyd,
I have a quick question, or maybe not such a quick question.
What’s the best way to reduce radiation when listening to streaming audio on a cell phone:
– A Bluetooth headset?
– Does Bluetooth drastically cut down on radiation as compared to having the cell phone near my ear?
– A physical wired headphone?
– Does the radiation transmit up the headphone cable that’s physically plugged into the phone?
– Those “thick protector stickers” that you apply to the outside of your cell phone?
Unfortunately, I depend on the internet, and consequently cell phone, for the majority of my news; and tune into my favourite radio stations while driving for work, at the gym, or doing chores around the house.
Do you have a chart or is there an article you can direct me to that contrasts/compares methods of getting the most sound to your ears with the least amount of radiation?
Thanks for a great site and newsletters!
Craig

Here is the answer I sent him :

Thanks for your great question. Below is my not so quick answer :

Bluetooth Radiation – What You Need To Understand

Bluetooth is the name of a wireless technology that uses pulsed radio frequency signals. Anybody that has been following my website will have just felt their ears prick up as I said the word “pulsed”. Not good.

Here is what Dr. Andrew Goldsworthy has to say about pulsed radiation:

“Pulses carried by microwaves are particularly dangerous. This is because their very short wavelength allows the transmission of pulses with extremely rapid rise and fall times, and it is the rate of change of the fields (rather than their total energy) that does most of the biological damage” Source.

Because when we talk about pulsed radio frequency signals we are of course talking about radiation, or in this case Bluetooth radiation. Read on….

All the more reason that we should be really clear as to what the potential dangers are with Bluetooth radiation.

Is All Bluetooth The Same? 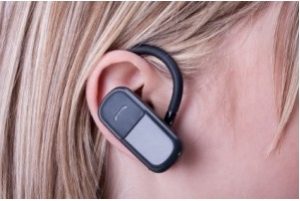 Bluetooth transmits at frequency levels in the 2.4 GHz band. There are three power classes and it’s these power classes which are your best indicator as to what level of Bluetooth radiation you’re exposing yourself to :

Class 1 transmitters — are the most powerful, have a range of 100 meters and peak transmission power of 100 mW (milliwatt)

Class 2 transmitters — are usually found in mobile devices and they have a range of 10 meters and operate at 2.5 mW peak transmission power

So the first thing to do is to check what class of transmitter your Bluetooth headphone is. You should find this information in the manufacturers specification. I say ‘should’ because it seems some manufacturers deem in unnecessary to share this information. That’s why I’ve done some research on this and listed at the bottom of the page a selection of the ‘lower EMF’ Bluetooth devices that are on the market.

What about Bluetooth radiation?

The radiation from your Bluetooth earpiece will zap you just the same because Class 1 Bluetooth headsets can expose you to the similar radiation levels to your cell phone if they’re operated in close proximity to the body.

What Does Bluetooth Version Mean?

Is a Bluetooth version with a lower transmission rate safer? It’s possible but we don’t know. There are no studies on this so we’re pretty much in the dark.

What Does Science Say About Bluetooth Radiation?

The science on this issue can seem confusing. The problem is there is a huge amount of funding bias and outright manipulation of the science in order to publish studies which show favorable results. The cellphone industry is ready to spend a considerable amount of money to protect its interests. Various studies support (American Cancer Society 2008, Martinez & Burdalow 2009) the view that Bluetooth headsets when used in conjunction with cellphones decrease the overall levels of SAR exposure to the head. Whereas other studies show a diversity of hazards from these exposures.

One study found that , “men who keep cell phones in a trouser pocket in the talk mode while using a Bluetooth device may experience decreased fertility“. High-frequency electromagnetic fields can lead to a significant increase in blood pressure and affect biological processes in the body just the same as cell phones. Just two hours of exposure to high-frequency EMFs from a cell phone or Bluetooth headset, can cause irreparable DNA damage.

So to answer your questions Craig:

Does Bluetooth Drastically Reduce My Radiation Exposures Compared To Having The Cell Phone Against My Head?

Not necessarily. Research shows that Bluetooth devices that fit in or around the ear typically have a Specific Absorption Rate (SAR) of 0.23 watts per kilogram (W/Kg). Specific Absorption Rate (SAR) is the rate at which your body absorbs radiation. Compare this average Bluetooth SAR level with any website that shows cell phone SAR levels and you’ll find that some Bluetooth devices are worse than some of the low SAR cell phones.

In theory a Bluetooth device does drastically cut down radiation exposure compared to having the cell phone next to your ear if you could be sure that you were only exposing yourself to Bluetooth radiation. The problem is that when you use a Bluetooth headset that the transmission strength from the cell phone itself is not decreased. If for instance you are putting the phone in your pocket or clipping it to your belt then you are at the same time exposing your internal organs to radiation.

The Swiss Federal Office of public health recommends that cell phones should not be carried in a front trouser pocket when making calls and that it may be safest to hold the phone away from the body to reduce radiation. Studies (Whittow 2008) have also found that metallic objects situated near your waistline, such as coins, a belt buckle, rings, keys etc increased the Specific Absorption Rate (SAR) in the body at different frequencies.

Two other points are worth noting here:

Does The Radiation Transmit Up The Headphone Cable That’s Physically Plugged Into The Phone?

Yes, it can. The headphone can act as a sort of antenna for your cell phone giving the radiation a fast route into your brain. The science is sketchy on this but in my view, having tried wired headphones, they are not the solution to reducing your radiation exposure. This is now widely accepted and yet wired headphones continue to be sold by the boatload to the population at large.

To overcome the antenna effect of wired headphones use an airtube hands-free kit.

Do You Have A Chart That Contrasts/Compares Methods Of Getting The Most Sound To My Ears With The Least Radiation?

I don’t know of any comparative resource on this topic but to answer your question, “what’s the best way to reduce radiation when listening to streaming audio on a cell phone?”. Remember: distance is your friend.

I’ve tried cell phone chips, diodes and neutralizers from many different suppliers. None of the devices I’ve tried worked. In some cases using these devices can be more dangerous than not using them.

Despite reading all of the above if you’re still committed to using a Bluetooth headset where does this leave you?

To determine how dangerous a Bluetooth device is, the best information we have to go on is the power classification, or the Class.

The worst offenders are Class 1 headsets. There are quite a few of these on the market, for instance the Callpod Dragon is a Class 1 Bluetooth headset and therefore to be avoided if radiation exposures are your main concern.

In an ideal world you’d use a Class 3 headset, which are the lowest powered headsets and therefore the safest. Unfortunately because most people’s top priority is having a good strong signal Class 3 headsets are a relic of the past. That leaves us with the Class 2s.

The problem is the power classification of a headset takes some rooting out. The manufacturers are very ‘low profile’ about sharing this information. I’ve tried contacting a few of them – most of them don’t reply and the one’s that do often don’t know what I’m talking about.

Nevertheless I’ve rooted some out. Click here to see my listing of Class 2 Bluetooth headsets.

The frequency of Bluetooth wireless headsets is the same as that of microwave ovens. Microwave ovens use much higher power levels. But the power levels themselves are not the issue. Its the rate of change of the EMFs, the pulsing, that causes most of the biological damage. Bluetooth radiation is dangerous.

Bluetooth headsets are particularly dangerous because they are held within centimeters of the brain and they are used in conjunction with a cell phone. So you’re getting double exposure. If you use Bluetooth in a car the effects are multiplied due to the Faraday cage effect.

Some people are electrically sensitive, they can feel the effects of these exposures. But don’t think that because you can’t feel anything that you’re not being affected by Bluetooth radiation and similar exposures. This is not what the studies are saying.

If you’re not clear about the dangers of EMF to your health you might be interested in reading my extensive review of the scientific research.