Why would you buy the Acoustimeter AM-10 when there are so many other RF meters to choose from? For the uninitiated I am sure it can be difficult to come to any sort of decision.

In this article I am going to explain everything you need to know, in layman’s terms, so that you can decide if the Acoustimeter AM-10 RF Meter is the right meter for you. 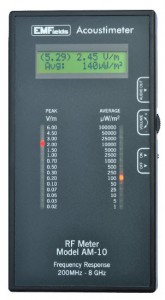 I know when I first learned about electromagnetic radiation it did all seem very confusing.

It is a complex subject but I have found “seeing is believing”, having a meter which can show you in a matter of seconds what you need to know, is a big help. Simplicity is one of the strong suits of the Acoustimeter AM-10 RF Meter.

The Acoustimeter AM-10 RF Meter has:

– pulsing signal may be heard through the audio speaker

How To Read The LCD Display

The Acoustimeter display has 2 lines where 3 different readings are shown simultaneously. The display can be read as follows:

– on the top line the reading in brackets, (5.29), corresponds to the “peak hold” reading in V/m, that’s to say the highest reading recorded since the unit has been switched on

– the number next to this, 2.45, is the current peak signal strength in V/m

– the number on the bottom line, 140, is the average reading in microwatts per square meter (µW/m2)

What Can You Measure With The Acoustimeter AM-10 RF Meter?

The Acoustimeter AM-10 RF Meter is a dedicated radio-frequency (RF) radiation [3] meter. Now what does that mean?

In simple terms it means this meter is ideal for measuring radiation from the following sources:

What Is So Unique About The Acoustimeter AM-10 RF Meter?

There are two things that really differentiate this meter from other RF meters:

– its exceptional range and sensitivity

– its ease of use

I have found the Acoustimeter AM-10 RF meter to be a sensitive meter. But apart from being sensitive it also has very good directional sensitivity for a meter that cannot be defined as a directional meter, strictly speaking. Whereas many RF meters just tell you what the level of RF radiation is, with this meter you can in certain circumstances tell where its coming from. By tilting the meter at different angles you can home in on RF sources in your environment, a hidden cell tower or distant WiFi router, which you could never have imagined picking up a signal from. (If you are testing in an area where there is RF radiation from many different sources then its unlikely that you will be able to get accurate directional readings).

The second point is the frequency range. Many RF meters only measure up to 2 or 3 GHz. More and more wireless appliances are working above this range, whats the point in buying an RF meter if it can’t measure the RF radiation you are being exposed to? The Acoustimeter AM-10 RF meter measures RF radiation from 200 MHz right up to 8 GHz so in terms of wireless radiation there is not much (if anything) that gets past it.

How To Use The Acoustimeter AM-10 RF Meter

First insert the batteries (2 x AA cells) and move the power switch to “on”. Set the volume to a level where you can comfortably hear whats going on and you are good to go. Start moving the meter around slowly, methodically, in all directions all the time listening for any signal and watching the two columns of LED display lights. There is also an LCD display where you can see the RF levels moving up and down in numbers and the peak level since you last switched it on, shown in brackets.

Here is a short video of me using the Acoustimeter AM-10 RF meter to measure WiFi radiation:

How Do I Know When The RF Radiation Is Too High?

The beauty of this meter is its audio function. As soon as you pick up any kind of reading you will hear it on the loud speaker (or on your headset if you plug in on the jack). Then you consult the displays to gain an appreciation of what the radiation levels are exactly. This meter gives you quite a lot of information but if you are looking for a quick and easy way to measure RF levels then just look at the left hand column (the peak V/m readings). Even a reading as low as 0.02 volts per metre (V/m) is shown by a green LED , an increase in radiation levels will then light up more green lights, then the orange LEDs and then the red LEDs.

How you interpret these radiation levels depends on your circumstances. There are 2 things to take into consideration:

1. the duration of exposure

For instance sleeping in a bedroom with radiation levels at the top end of the scale (a red light in the left hand column) means that you are exposing yourself to high radiation levels over a long period of time, this is not advisable for anyone.

So how do you know when the RF radiation levels are too high? For me personally, as an electrosensitive, I try to ensure that any living areas where I am spending more than a few hours are either giving me zero radiation (no LEDs lit) or radiation at the very bottom of the scale (green LEDs lit).

Is This The Right Meter For You?

You might be concerned about radiation being emitted from a nearby smart meter, or maybe you live in an apartment surrounded by other apartments equipped with WiFi and cordless phones. Maybe you are just someone interested in the health benefits of EMF mitigation, or maybe you are someone who is showing the first signs of electrical sensitivity. If you are worried about the radiation levels in your environment but you don’t know what the culprits are, this meter because of its directional sensitivity is the ideal choice because it can tell you what the principal causes are of these high levels. Once you have determined your exposure levels you can shield and protect as appropriate.

What About The Disadvantages ?

– its size, it’s quite a bulky meter

But for this level of sensitivity and accuracy it does seem a fair price. Its not the most expensive meter on the market (you can pay thousands for a professional RF meter) but neither is it the cheapest. And it only measures RF radiation, if you want to measure other EMFs like electrical and magnetic radiation this is not the meter for you.

Where To Purchase The Acoustimeter AM-10 RF Meter?